Location of the impact flashes detected so far by NELIOTA.

The 1.2m Kryoneri telescope at Kryoneri Observatory (established in 1972), located in the district of Corinth in the northern Peloponnese, was selected for the NELIOTA system. The telescope, in its original configuration, was a Cassegrain reflector with a primary parabolic mirror (1.2 m in diameter) and a secondary hyperboloid mirror (0.27 m in diameter) and a focal ratio f/13, manufactured and installed in 1975 by the British company Grubb Parsons Co., Newcastle. The mirrors were manufactured by Zerodur.

In May 2016, the telescope was upgraded by DFM Engineering Inc. by the NELIOTA project. This upgrade included the replacement of some mechanical parts of the telescope, a new control system, dome automation and the installation of a Prime Focus Instrument (PFI) able to provide a large field-of-view as required for NELIOTA. The optics yield a focal ratio of f/2.8.

The PFI includes a dichroic beam splitter which directs the light into two paths and provides simultaneous imaging in two channels (R and I-bands). Two fast-frame sCMOS cameras are attached to the backend of PFI. The final field-of-view is 16.6 x 14.0 arcminutes (21.7 arcminutes in diagonal). On June 27th, 2016, first light images of the Moon were obtained through the PFI with the cameras.

The design of the PFI can accommodate another option for imaging, hosting a “direct imaging” Apogee Aspen CCD where the light path is directed directly to the prime focus. With this option the field-of-view can be as large as 1 square degree (depending on the detector used). In this configuration, the field-of-view is 12.3 x 12.3 arcminutes (17.4 arcminutes in diagonal). The camera has a 1024 x 1024 format giving a pixel scale of 0.72 arcseconds/pixel. On June 27th, 2016, first light images were obtained, imaging the globular cluster M13 (left), the galaxy M51 and its companion (middle) and Trifid Nebula (right). 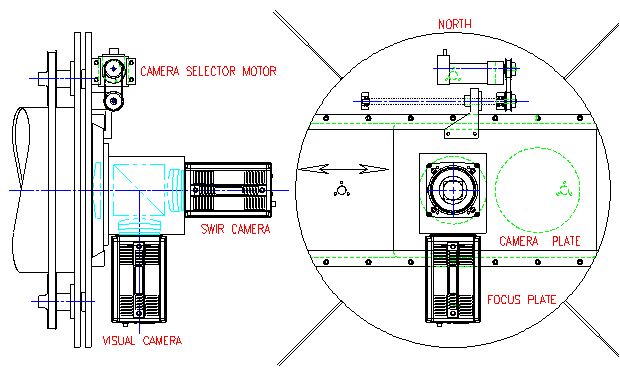